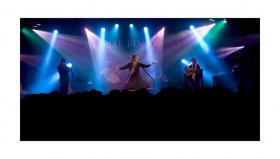 MANJARI CHATURVEDI is a leading exponent of the Indian classical dance form of Kathak and is acclaimed for being the creator and ONLY performing artist of Sufi Kathak. She has combined the mysticism of Sufi traditions with classical Indian dance to create a stunning new school of performance called Sufi Kathak. Thus, setting a historical step in the field of performing arts through the creation of a completely new artform, which remains original and yet follows the precedents of mystical traditions that are nearly 700 years old. In the last decade, Manjari has performed in more than 200 concerts all over the world including Europe (France, Germany, Portugal, Italy, Austria, Switzerland, U.K. & Ireland), the Middle East (Dubai, Bahrain, Abu Dhabi, Qatar, Kuwait), South East Asia (Singapore, Malaysia, Sri Lanka) and Central Asia
(Turkmenistan, Kyrgyzstan, Uzbekistan, Tajikistan) along with Australia and America.

Manjari Chaturvedi, classical Kathak danseuse and a performing artist for over a decade, is an extraordinary young dancer, adding subtle innovations to the Kathak repertoire while preserving the tenets of the classical style. With her enchanting stage presence, she is known for her intense, sensitive and graceful Kathak dance presentations.

A danseuse representing Lucknow gharana of Kathak and postgraduate in Environmental Sciences, Manjari embodies the Awadhi ethos, bridging the gap between tradition and modernity. Her performances preserve the doctrine of classical temple and darbari forms, yet they are accessible to audiences across the world. Manjari is trained in classical Kathak by Guru Pandit Arjun Mishra. She has developed the detailing of abhinaya (expressions) under Smt. Kalanidhi Narayan and Smt. Priyadarshini Govind, and has worked at Nrityagaram in association with Guru Protima Bedi and Guru Kumudini Lakhia. Manjari is an empanelled artist with the Indian Council for Cultural Relations.

Manjari Chaturvedi is the creator and the only performing artist of Sufi Kathak. Conceptualise and created by Manjari, Sufi Kathak has taken 13 years of her intense work in Sufi music and classical dance. Introducing the mystique of Sufism in dance, she traveled to countries like Egypt, Kyrgyzstan, Uzbekistan, Turkmenistan, and Tajikistan and worked with artists from Iran, Turkey and Morocco to study the music and dance forms related with Sufi thought. Bred of Manjari’s knowledge and experience, Sufi Kathak melds the philosophical depth of Sufi poetry with the narrative beauty and grace of classical Indian dance forms to evolve a new school of performance that uses classical dance to narrate and interpret Sufi poetry. But even as Manjari is acclaimed for her efforts to create a new classical dance form, it has been an arduous journey for her as she trod upon a path not traveled earlier in classical art forms to create the emergence of a completely new art form based on a thought that was, till now, not extensively used in dance! This led to the evolution of Sufi Kathak, which works only on this one thought – the concept of formless Almighty. Sufi Kathak is a dance form that spans from earthly romance of Hindi folk to the evolved Sufi imagery of love in Persian poetry, from a beloved in flesh and blood to the abstract presence of the Almighty, from a form to formlessness. Making Sufi Kathak, the Dance of the Soul.  While in existing classical Indian dance forms there is a focus on a beloved in flesh and blood, in physical form, it is the abstract presence of the Almighty that becomes the focal point for the Sufi Kathak dancer. Akin to the moving meditation of the whirling dervishes in the Sufi tradition, the unique dance form called Sufi Kathak by Manjari Chaturvedi is representative of the great Sufi traditions of the subcontinent. Manjari, in her peerless journey, seamlessly blends her dance with diverse cross cultural music in exciting collaborations. She was trained in classical Kathak dance of Lucknow gharana, and then subsequently learnt the nuances of other classical Indian dance forms - the base being the natya shastra - that is followed by all classical dances. Manjari trained in Abhinaya learning the nuances of use of mudras from the bhartanatyam genre to enrich Sufi Kathak. With her own efforts, Manjari has made the dance form  richer by adding new dimensions to the dance form with varying music creating a wide repertoire, which was earlier never a part of any classical dance traditions by aligning Sufi Kathak with the Sufi music of Rajasthan, Kashmir, Qawwalli of Awadh, poetry of Bulleh Shah of Punjab and spiritual music of Iran. Through more than a decade of Manjari’s dedicated endeavours, Sufi Kathak, now, has its own visual entity separate from other Indian classical dance forms. The poetry is separate, the use of language, the use of movements, the music genre to be used, the costume & jewelry and the aesthetics are all specific for a Sufi Kathak dancer. Sufi Kathak by Manjari transcends all religions to become a link bridging God and the devotees;  taking one far away from materialism. It is synonymous with serenity, piety, mental peace and divine power, which is a symbol of truth. It is attracting the new generation at the international level, breaking barriers as an example of unity in diversity.

The Sufi Kathak Foundation is a non-profit registered society founded by Manjari Chaturvedi to create  awareness for Sufi Kathak and other related ancient performing art traditions. The Foundation works towards providing scholarships to students pursuing classical music and dance, and also pension and  medical insurance to needy artists. The aim of Sufi Kathak Foundation is to promote spiritual dance and music and world cultural unity, also initiating children and orienting the youth to become self-employed through arts - dance and music,  and evolve a humanist outlook. The main objective of the foundation is to create centers for spiritual dance and music, folk & classical dance and organise training classes, workshops and musical concerts to promote Sufi Kathak and classical music in India as well as across the world. The society\'s mission is also to provide financial and technical assistance to retired artist as well as to needy students who are committed towards Sufi music and dance.

Concert at Amusement Park - Kuwait, May 2006

Kathak Presentation at the Embassy of Turkey - New Delhi, 2004

Concert at the Embassy of Greece – New Delhi, 2000